Yes, I know it’s been a while since I’ve written a blog.  And I know I said that I’d try and write something every day, but to be honest, I am not that creative to think of interesting topics to talk about like others do.  I’m having a hard enough time trying to get back into my writing schedule.  After all, I still have a sequel to write.  And a script.  I swear that one is going to be the death of me yet.

I guess the latest bit of news is that my trip to Cuba with hubby and friends went off successfully.  Albeit a rough start, but once we got settled in, we were able to relax (somewhat), and take in the sights (and drinks 😉 ) and meet new people.

We went on a little day trip to Varadero by means of a double decker bus.  That was fun.  It was my first time on one, and we got to sit in the upper part.  You pay 5 pesos each to get on, the lady would give you a ticket (more like a piece of paper with the name of the bus on it) and you go into town.  There’s no set time either to have to catch the bus back.  Anyway, we got to a spot where our friends remembered from their first time there and we got off.

I must say,, I was pleasantly surprised.  There were no one hounding you to buy their stuff.  Until we went on our Havana excursion.  Luckily for our tour guide, there were only 8 of us going (less people to loose).  Our guide (Maibel) and driver (Pavel) for the Havana tour were awesome.  She was very well informed on the sights we seen, plus any other little tidbits that we might find interesting.

We also done the Dolphins and Catamaran excursion, which was a lot of fun.  They took us snorkelling,, which I tried to do, but in the end, ended up going back to the boat.  I think if I had to have had on a life jacket, I wouldn’t have panicked as much.  I can swim, as long as I know I can touch bottom, I’m fine.  In this case, I was finding it hard to concentrate on the breathing.  I had a face mask (the kind that goes over your eyes and nose), and for some reason, I forgot to take in a deep breath and go under.  Thus the panicking.  If we ever go to Cuba again, I’ll be wearing a life jacket so the overwhelming feeling of drowning won’t come over me. 🙂

Though, just one week is clearly not enough time to relax.  It would have been if there wasn’t so much confusion for the first 2 days.  But then Tuesday we went to Varadero, Wednesday we done the Havana tour (which was Old and New Havana, cigar factory and the rum factory and store).  Thursday we took a break and stayed on the resort. Friday was the Catamaran, then Saturday was home again.  Our friends had another week left.

Anyway,, That’s pretty much our Cuba trip,, I’ll leave ya now with some pictures during our week of fun. 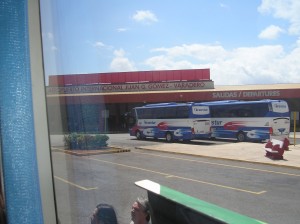 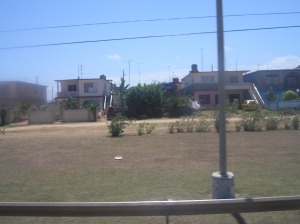 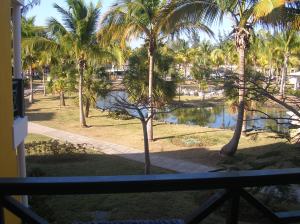 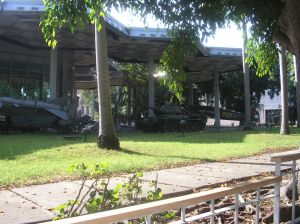 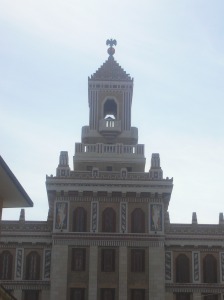 The power of Hurricane Sandy. Big stones embedded into the tree.

I used to have this as an indoor plant. They are growing everywhere down there.

Pavel, me, Maibel & my hubby

On the Catamaran heading to see the dolphins

This is what our maid, Betsy, done for our last night there.

One of many fish that was there in the little pool of water on the resort.

We hope to visit the same resort again in the future.

Until my next adventure,,,